Home » Top Things To Do In Bodrum – A Guide

Top Things To Do In Bodrum – A Guide

I visited Turkey for the first time in 2004, spending a great week in Dalyan in the Mugla Province. I haven’t managed to return since then, so when I was given the opportunity to travel to Bodrum I jumped at the chance. I’d heard great things about the peninsula and so was excited to explore it for myself and discover the many things to do in Bodrum!

Turkey has experienced a drop in visitor numbers in recent times due to the threat of terrorism, which unfortunately has affected many people working in the tourism industry. I checked the Foreign and Commonwealth Office website and the advice was to avoid the areas close to the Syrian border, but not the rest of the country. I, therefore, felt it was a good opportunity to go and experience Bodrum and help support the tourism industry. 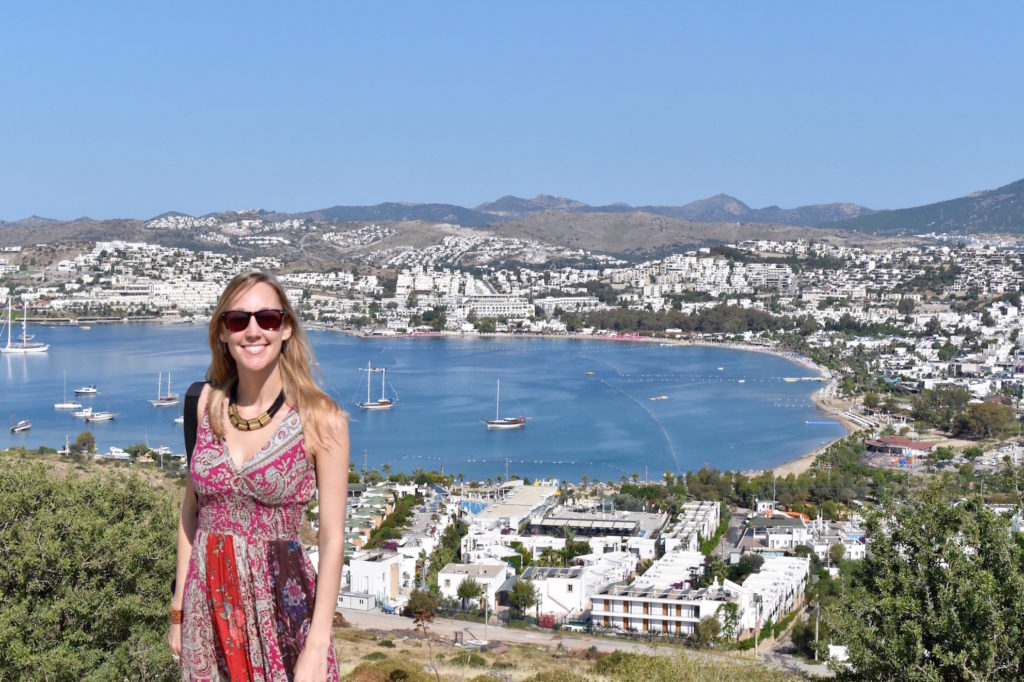 Bodrum is located in the Aegean region of Turkey, a beautiful port city with stunning bays, ancient historical sites, a variety of museums and some great bars and restaurants. As you enter the city, there are incredible views of the castle, harbour and traditional Turkish houses. These traditional houses are painted white with flat roofs, and nearly all of the houses in Bodrum are built in this style. The government has imposed a rule that no building can be built higher than two storeys without their permission. Because of this, the city has kept its traditional charm. Many of the houses have blue door and window frames and this dates back to an old superstition that the colour blue kept scorpions away. 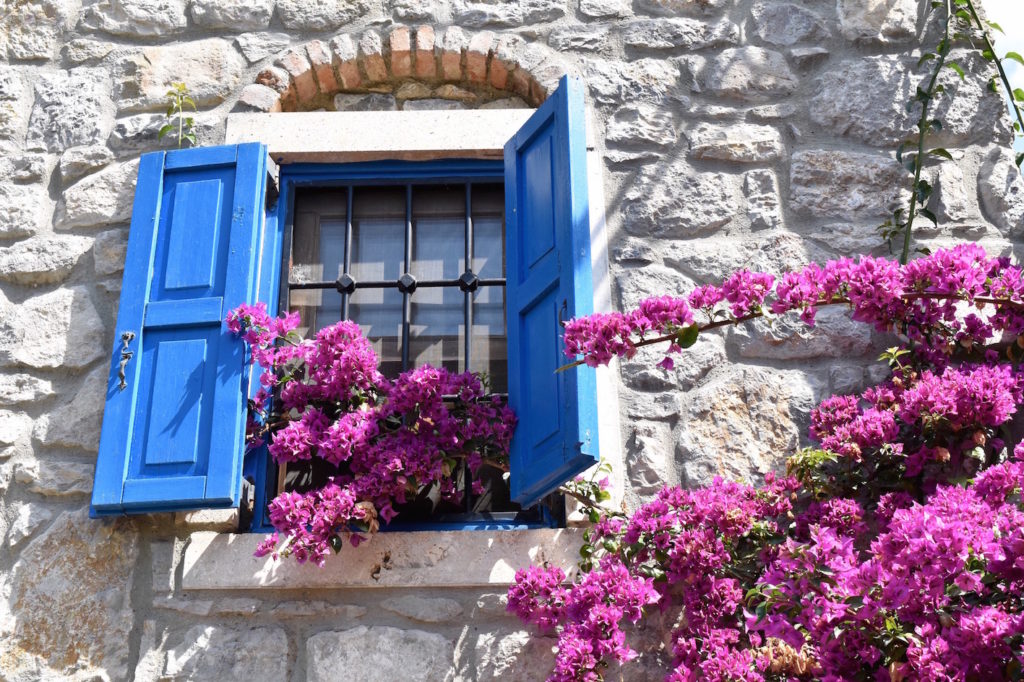 Where To Stay In Bodrum

The centre of Bodrum is pretty compact, and there are many small hotels and guesthouses around the harbour. The bigger resorts are generally based on the outskirts of the city, with their own private beaches. These require a shuttle or taxi to get into Bodrum, so it’s worth bearing that in mind when you book your accommodation. I stayed at La Blanche Hotel in the Turgutreis area of Bodrum. The hotel had great facilities including a number of restaurants and a huge pool and spa. It was about a 20-minute drive into Bodrum, but there were a few other restaurants and resorts located around the hotel, as well as a local market and shops. 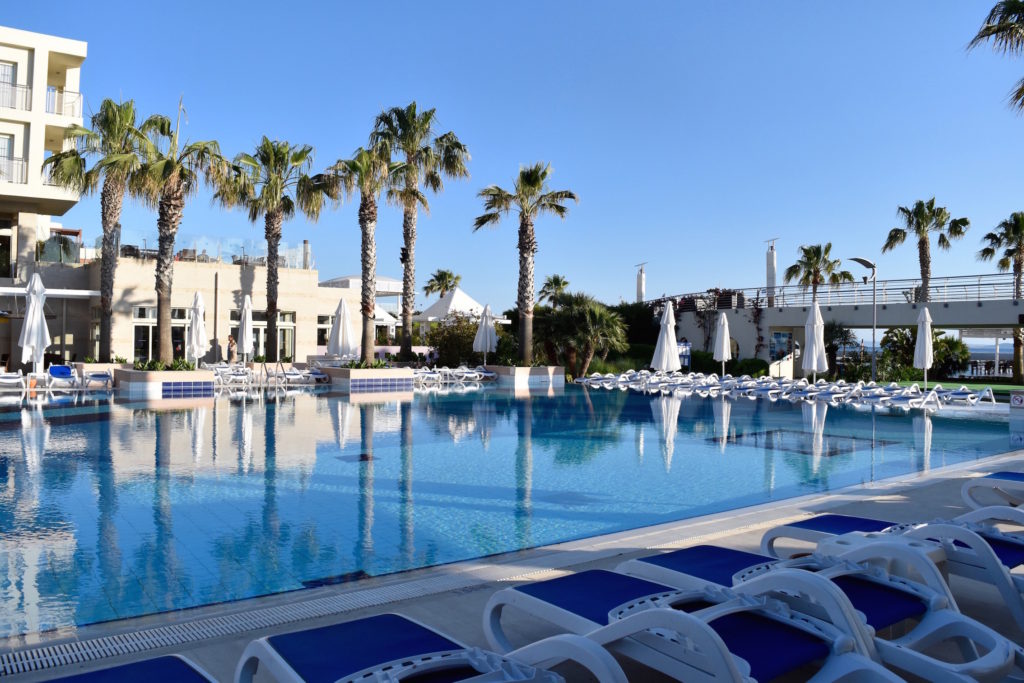 Things To Do In Bodrum

Bodrum Harbour is full of restaurants, with plenty of options for all tastes and budgets. You’ll find Bodrum has a few of the standard chains including McDonald’s and Starbucks, but the majority of places are locally owned. I visited a few of the harbour restaurants including Trafo, which used to be a famous Bodrum nightclub. This has a huge terrace overlooking the water and the food was great – fresh fish, salads and mezze.

On the main street overlooking the harbour is a restaurant called Big Chefs. This is part of a chain of restaurants and from the outside, it didn’t look particularly special, but once we had walked through the main restaurant we entered a huge courtyard with a swimming pool, which was beautiful. The menu was extensive and included dishes from all over the globe. 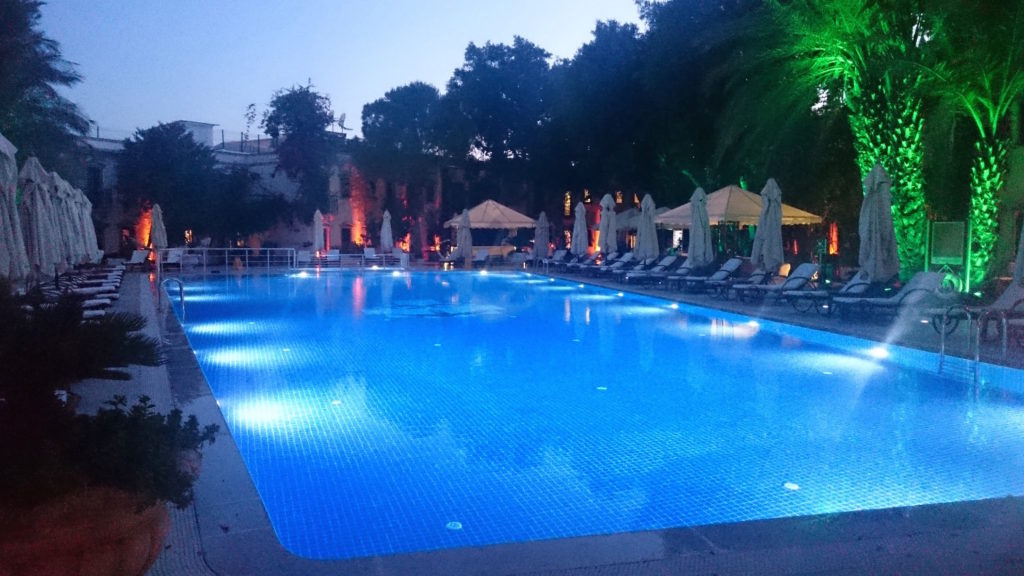 The Pool at Big Chefs

One of my favourite places in Bodrum is Gümüslük. Here there is a selection of restaurants lined along the water’s edge, a beautiful spot to watch the sun go down. I ate at the Mimoza restaurant, which is charmingly decorated with local gourd lanterns hanging from the ceilings of the terrace and from the trees. The food here is delicious and we ate fresh fish and salads with local wines. Definitely one of the most romantic things to do in Bodrum! 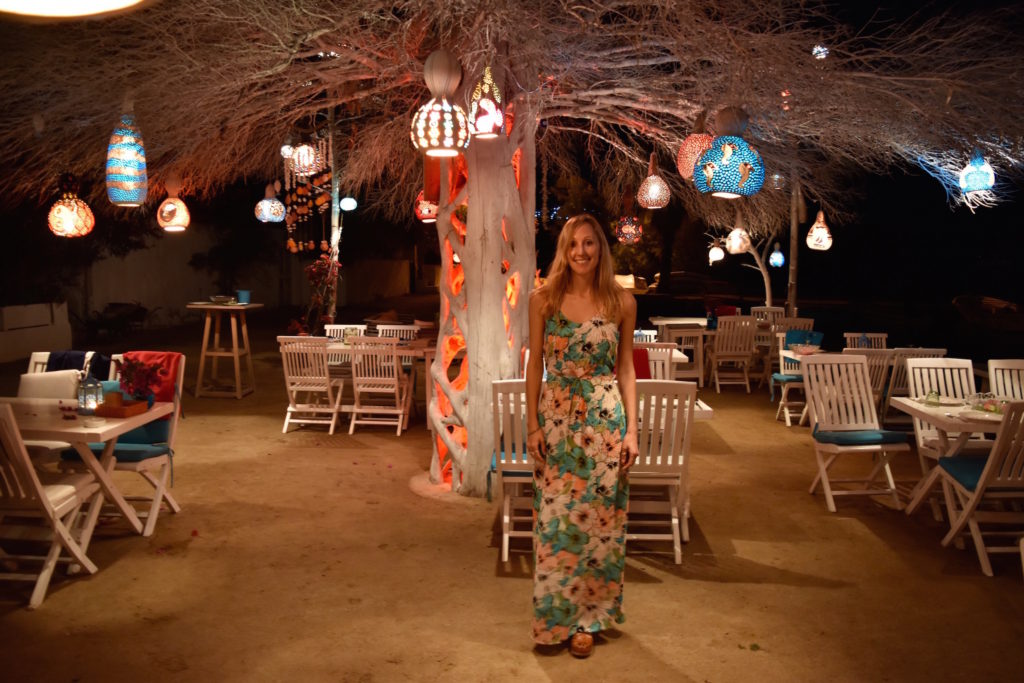 Up on the hills between Bodrum and nearby Gumbet are seven windmills. These were built by local Bodrum residents in the 18th century and were used until the 70s. Most are now ruins, but one has been restored. The hill offers spectacular views of Bodrum on one side and Gumbet on the other, the perfect spot for a panoramic view of the peninsula and some excellent photo opportunities! 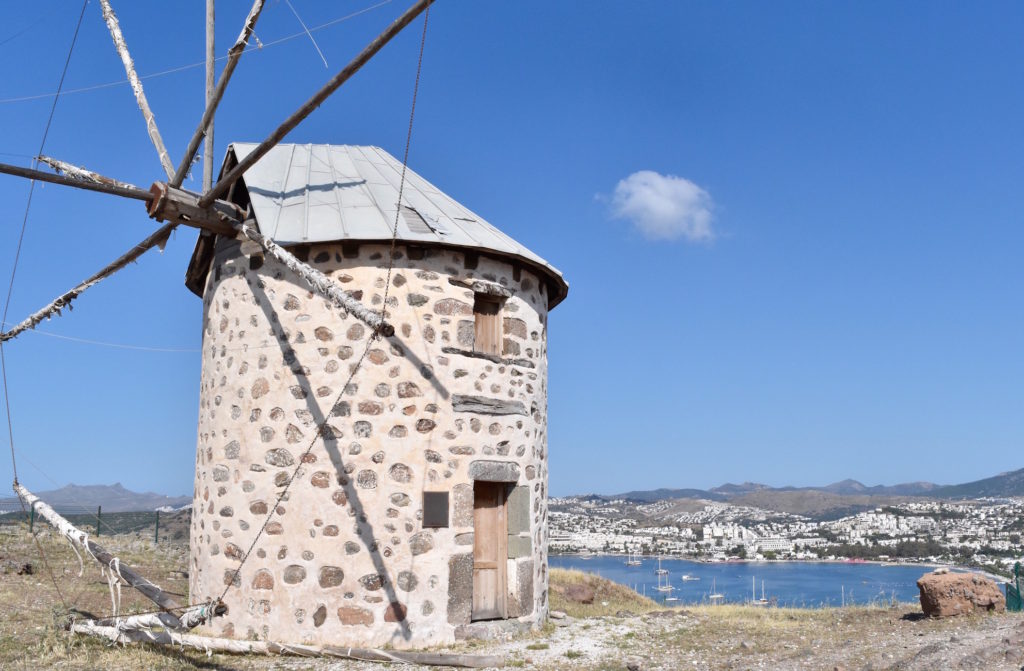 Bodrum is famous for the annual sailing event The Bodrum Cup, and many people come to the city to sail. There are a variety of companies offering boat trips from the harbour. A must do Bodrum activity is to take a day tour around the local bays. There is also the opportunity to take longer sailing holiday around the Aegean and Greek islands. 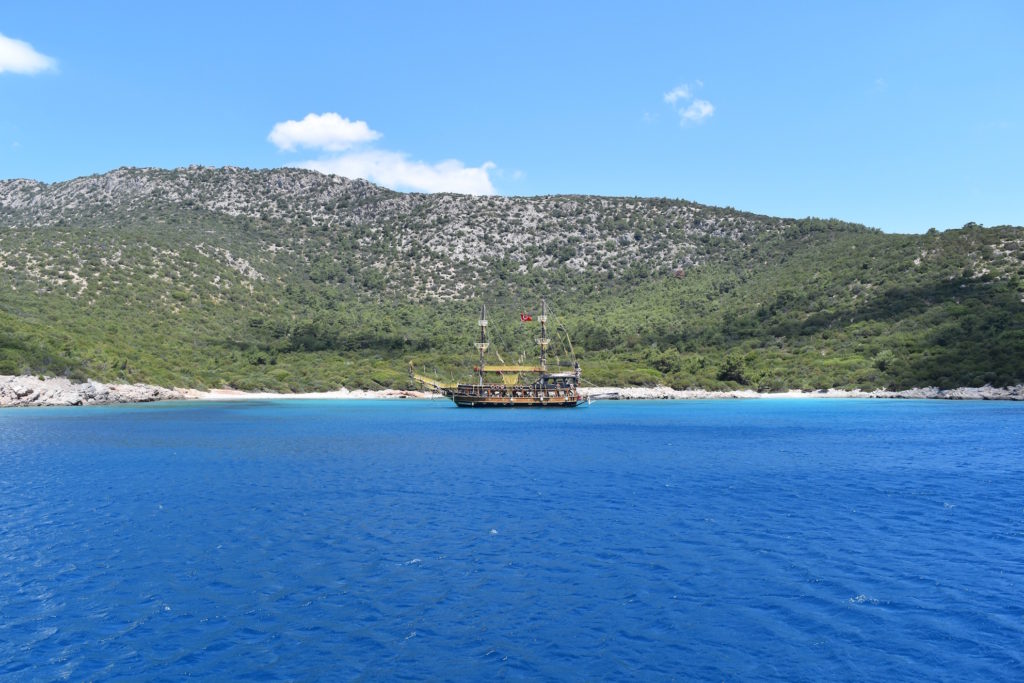 I took a day trip with Barbaros Yachting on board one of the traditional Gulets named Afroditi. The boat was amazing and is often used for longer trips (which I definitely want to go back and do!). The cabins were below deck and all had ensuite toilets (some with baths!), then above deck was an indoor bar/lounge area, with tables inside and out and comfy sun loungers. 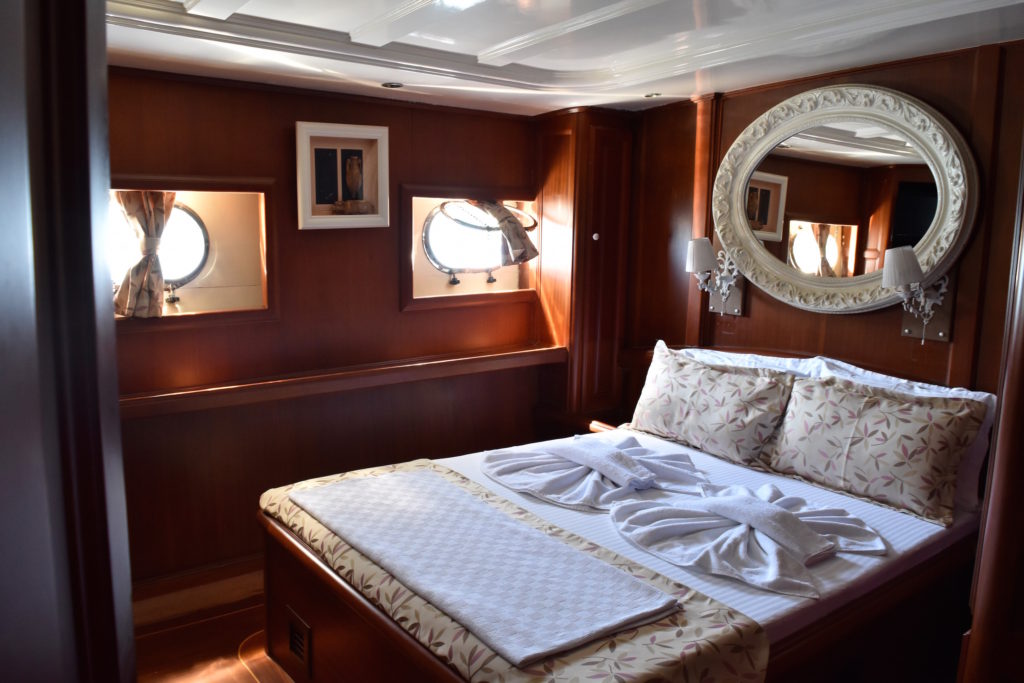 One of the cabins in Afroditi

Our captain was Barbaros himself, and along with a crew of 4, we set sail from the harbour, passing the castle and heading to our first stop – Black Island. Here we dropped anchor for a swim in a beautiful bay. The water was incredibly clear and we were able to jump and dive off the boat, which I loved. Barbaros supplied snorkels, masks and fins on board, as well as kayaks. After working up an appetite in the water, it was time for lunch – prepared by the crew; delicious salads, kebabs and pasta along with wine and beer. After lunch, we set sail for our next stop, Rabbit Bay, for more swimming. Then it was back to the harbour. 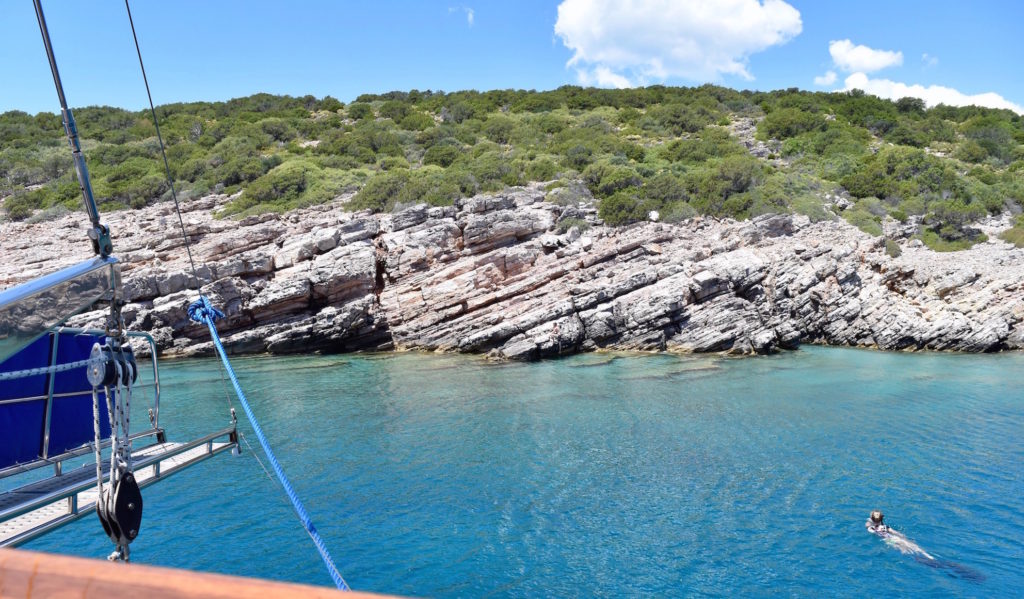 Barbaros Yachting offers private yacht charters from 1,100 euro per day (depending on the yacht), and the boats sleep from 6-36 passengers. Alternatively, you can take a cabin charter for a week from 260 euro per person including food.

There is so much history in Turkey and it’s really worth visiting some of the archaeological sites. Nearly all of these are free and are surprisingly unrestricted. Which means you can really immerse yourself in the history of the city.

At the heart of Bodrum is the castle; this was built from 1402 onwards by the Knights of St John. The Castle is now home to the Museum of Underwater Archeology and contains a number of wrecks that were discovered in the Aegean, as well as a collection of ancient items from the ships. The entrance fee is 25TL and it’s definitely worth spending a morning wandering around the castle grounds. 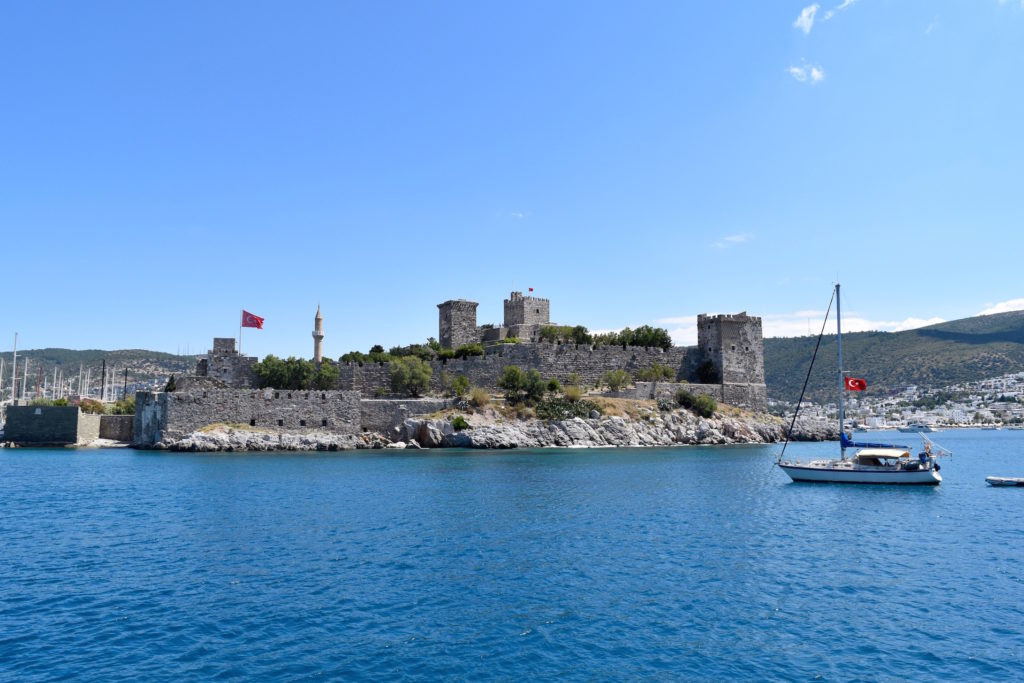 The Ancient Walled City Of Halicarnassus

The centre of Bodrum was once known as the ancient walled city of Halicarnassus. There were two main gates into the city; Mylasa and Myndos. Myndos gate was destroyed in 334 B.C. when Alexander the Great attacked the city, but part of the gate has been restored and you can visit the site and walk among the huge stones that make up the gate. 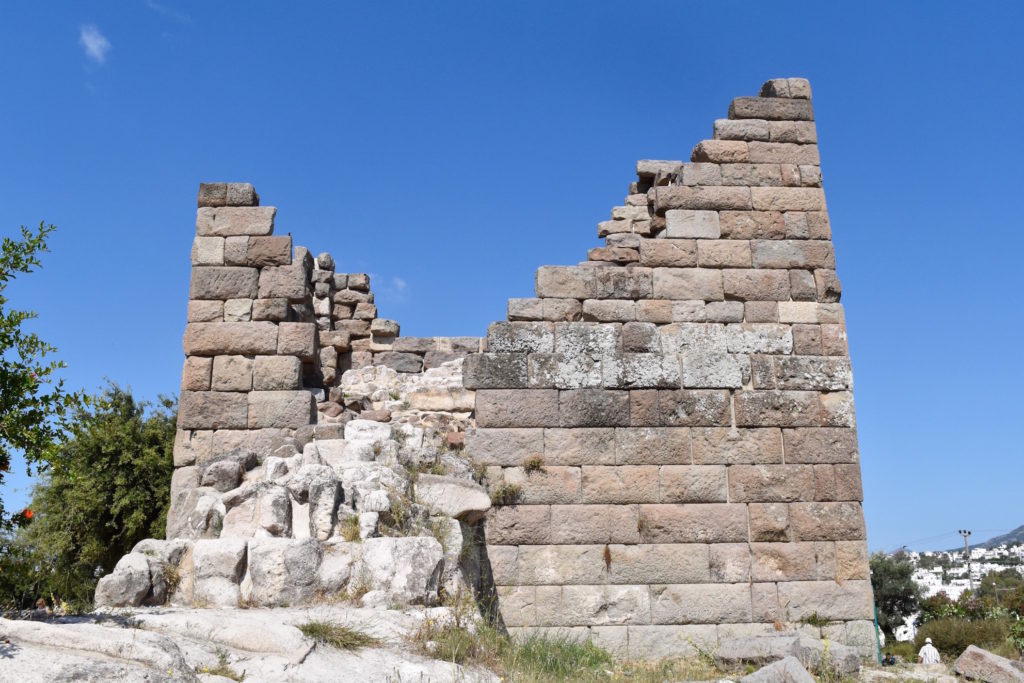 About an hour and a half from Bodrum is Stratonikeia. This ancient city dates back to 281 BC and is amazingly well preserved. Excavation began in the late 1970s and work is still being carried out. A small village, ‘Eskihisar’, had been built on the site, and although many of the villagers relocated when the excavation work began, there are still 5 families living in the village. Stratonikeia is remarkably unknown, and currently, there are no day trips from Bodrum to the site. So you either need a hire car or to take a local bus. The bus to Yagatan from Bodrum stops close by. 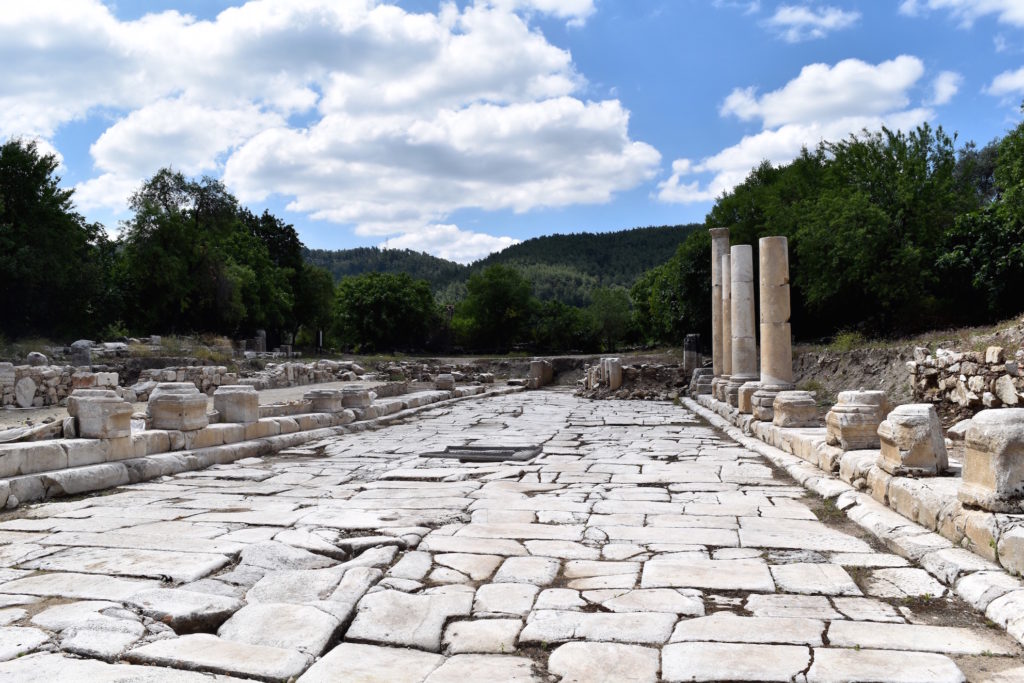 Bodrum is also home to one of the seven wonders of the ancient world; the Mausoleum at Halicarnassus. This grand tomb was built around 353 B.C. for Mausolus, who was a satrap of the Persian Empire, and his wife (who was also his sister). Designed by Greek architects and built of marble, the impressive structure was approx. 45m in height. The tomb became so famous that Mausolus’ name is now the eponym for all stately tombs. It’s unknown how the tomb was destroyed, but many think it was damaged in an earthquake. When the Knights of St John arrived, it was already in ruins. The knights then used many of the stones to fortify Bodrum Castle, but you can still see the foundations of the tomb. Entrance to the Mausoleum is 8TL. 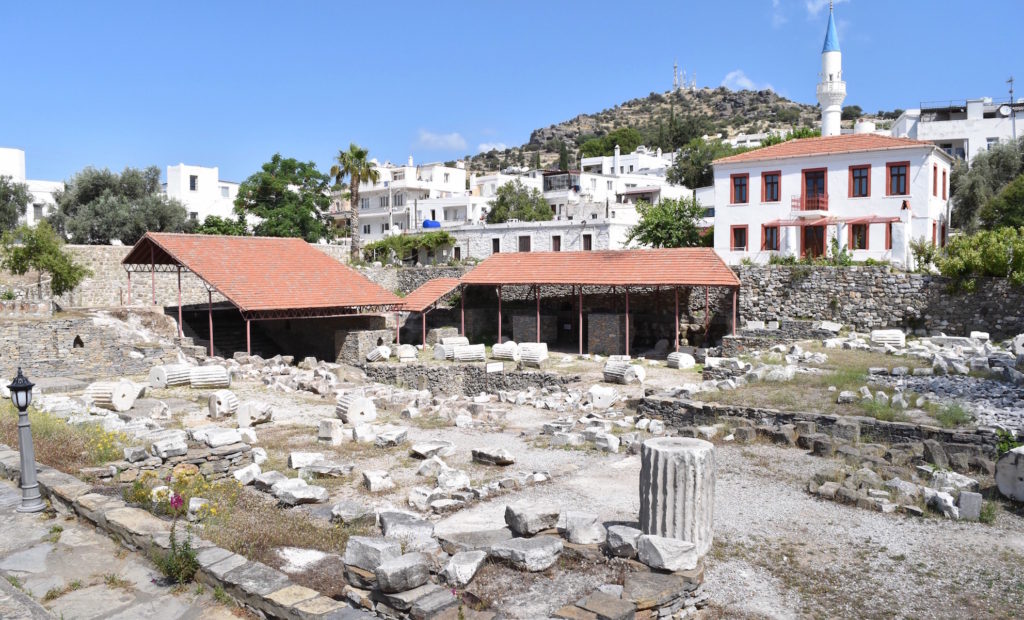 On the main road out of the city is the Amphitheatre. This was built in the 4th century BC and is still used for plays and musicals today. From the top seats, there are some lovely views of the castle and you can also see names engraved into the stone on the seats. 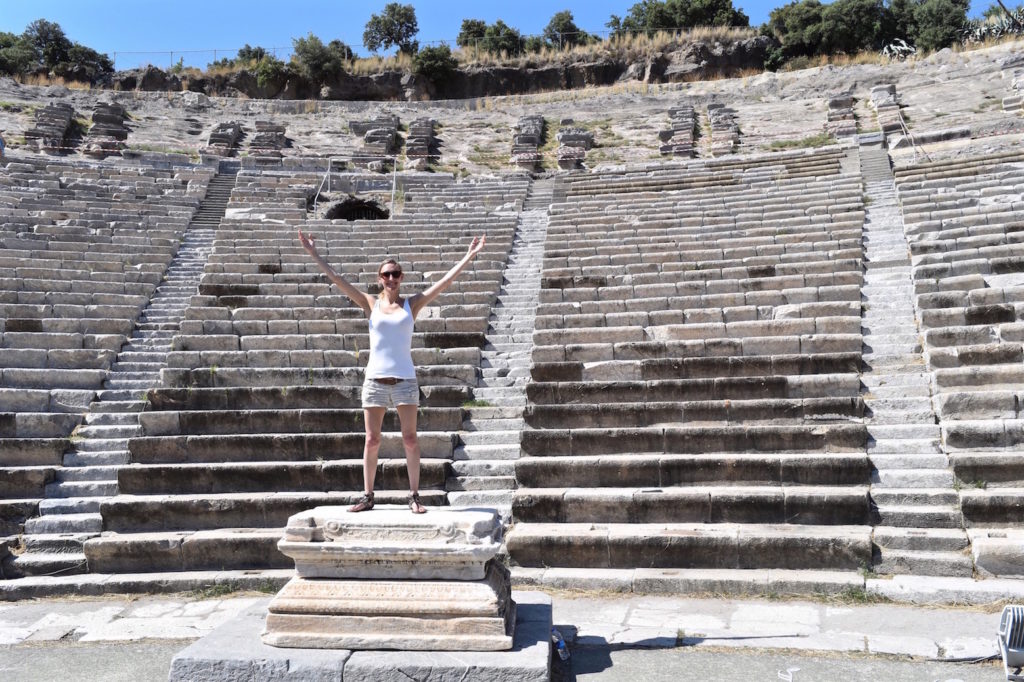 One of Turkey’s most famous exports is Turkish Delight, also known as Lokum. Bodrum produces its own variety of the treat, incorporating the local fruit – mandarin. The biggest producer in the region is Bodrum Lokum, who offer tours around their factory to see how Turkish Delight is made. I have to admit I had no idea of the ingredients, so it was really interesting watching them at work. I then tried some of the different flavours they produce before purchasing some to take home. 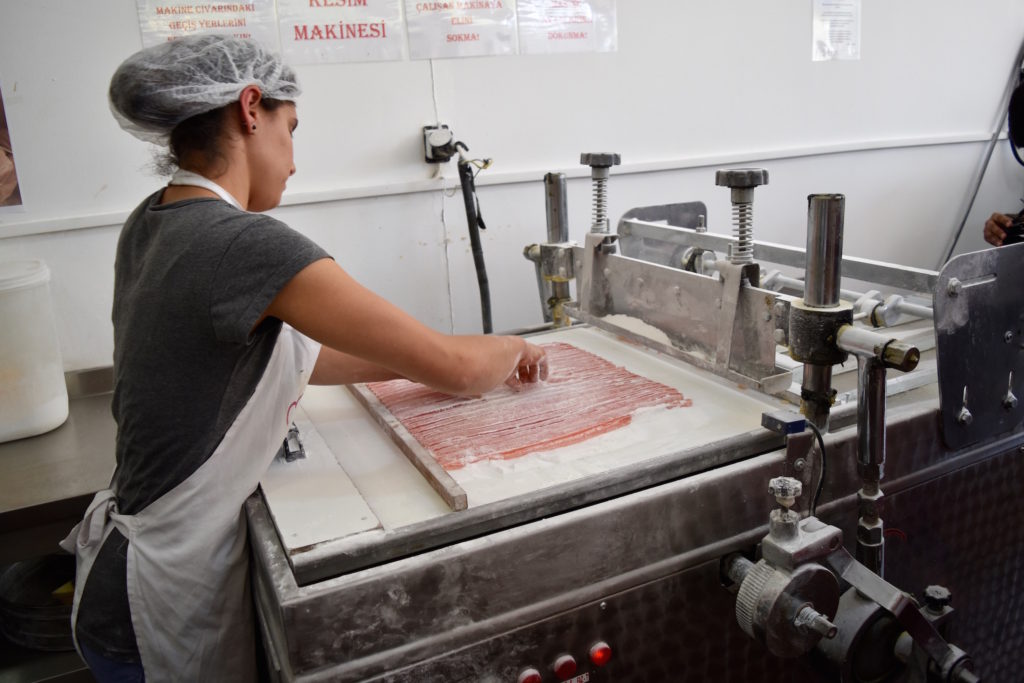 One thing I’ve found during both trips to Turkey is how incredibly friendly and welcoming the people are. Everywhere I went people said hello and wanted to chat to me about where I was visiting from. I was travelling early in the season and did not expect Bodrum to be particularly busy, but I was advised that there were fewer visitors than usually expected at this time of year. However I felt safe in Bodrum, and there were no points during my trip that I felt concerned about my well-being. 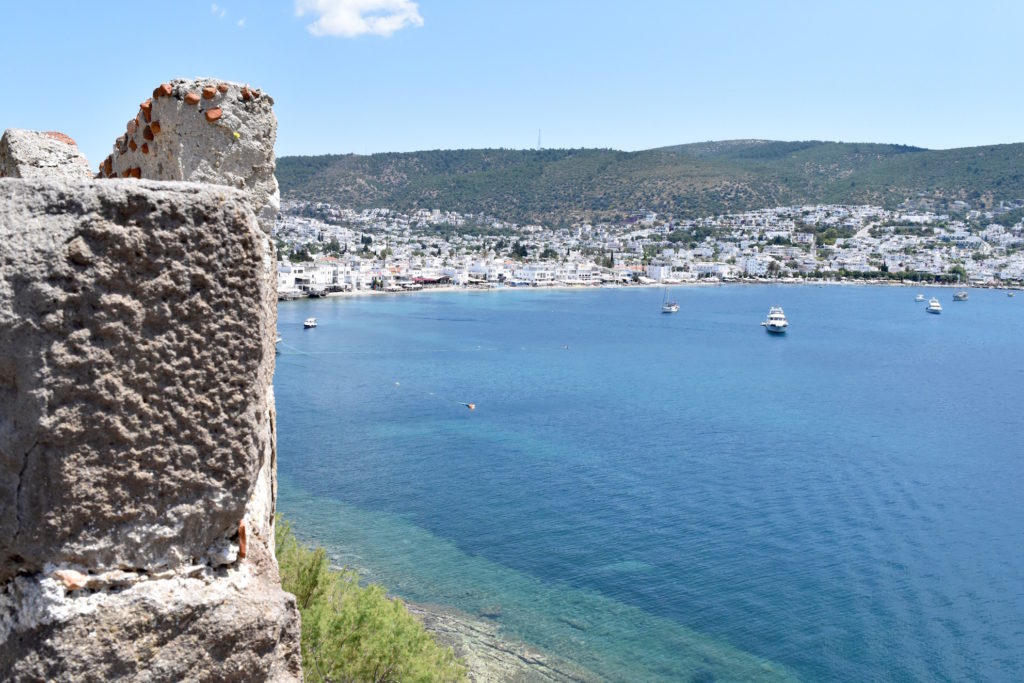 Bodrum has a really lovely atmosphere to it, I loved wandering the harbour, browsing the shops in the market and eating and drinking in the restaurants. I really fell in love with the place and am already planning to return for a sailing trip! 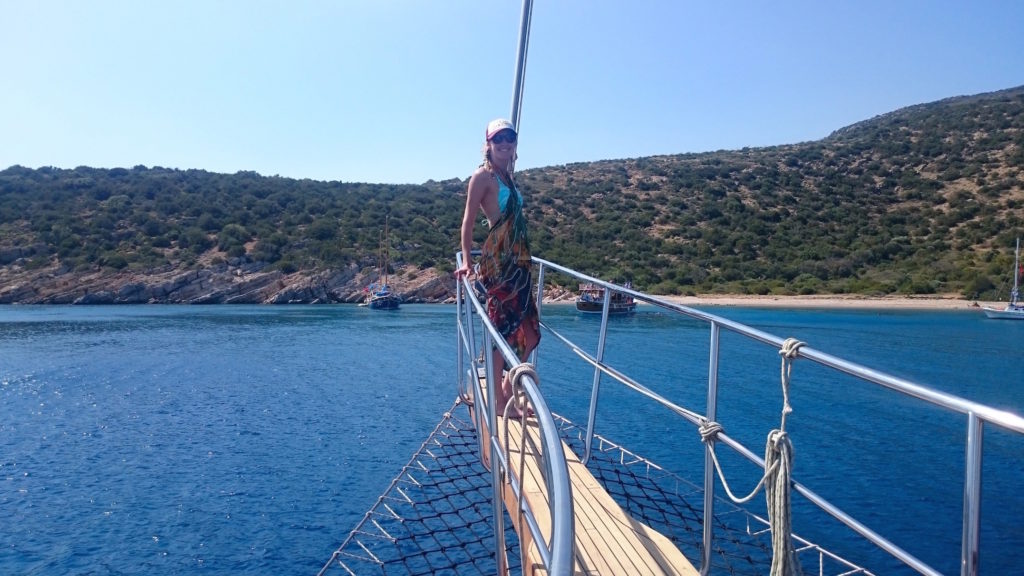 Sailing: one of the best things to do in Bodrum

Thank you to the Turkish Tourism Office for inviting A Lovely Planet to Bodrum.

Travelling in Europe? Check out our guide to Emilia Romagna, Italy

Something for the weekend…..Campo Viejo’s Lake of Colour

Hello, I am thinking about going to Bodrum in April, but I’m not sure what the weather will be like. When did you go?

I went in May and the weather was lovely. It probably won’t be really hot, but warm enough to swim and enjoy the pool/beaches. I had a quick google and the average high is 17°. Hope you have a great time!