The Best Tacos In Mexico City

Every time we spoke to someone who had visited Mexico before our trip, the first thing they said was ‘the food is so good!’ So it was one of the things we were really excited about before arriving. It certainly didn’t disappoint, we ate our way across the country, enjoying mole in Oaxaca, cochinita pibil in Yucatan and tequila in Jalisco. In Mexico City, it was all about tacos. We tried a huge variety of different tacos and explored the different neighbourhoods checking out the best places to eat. We also took two food tours while here with Tasty Bites Food Tours to get in the insider knowledge on the best tacos in Mexico City. I would highly recommend taking one of these tours when you arrive in the city, not only does it introduce you to some great places to eat and drink, but it also helps you get your bearings of the city. Additionally, it made us feel much more comfortable about exploring the city on our own.

The Best Tacos In Mexico City

You can’t visit Mexico without trying tacos – they are a staple of the Mexican diet and in Mexico City, you’ll find them on almost every street. Though there are many variations, tacos are essentially soft corn tortillas with an assortment of fillings such as seasoned meat, legumes or cheese, often garnished with salsa and chilli.

‘Tacos Al Pastor’ means shepherd style, one of the most popular types of taco. We ate tacos al pastor many times during our travels in Mexico, in particular in Mexico City.

Thin strips of pork are sliced from a trompo (a vertical rotisserie) and marinated with achiote (a Mexican spice). They date back to the arrival of Lebanese migrants in the early 1900s who brought the shawarma concept with them.

El Tizoncito claims to be the birthplace of tacos al pastor, and while that may or may not be true, they are totally worth trying. Located in the Condesa neighbourhood, this was the first stop on our taco and tequila tour and the tacos were delicious. 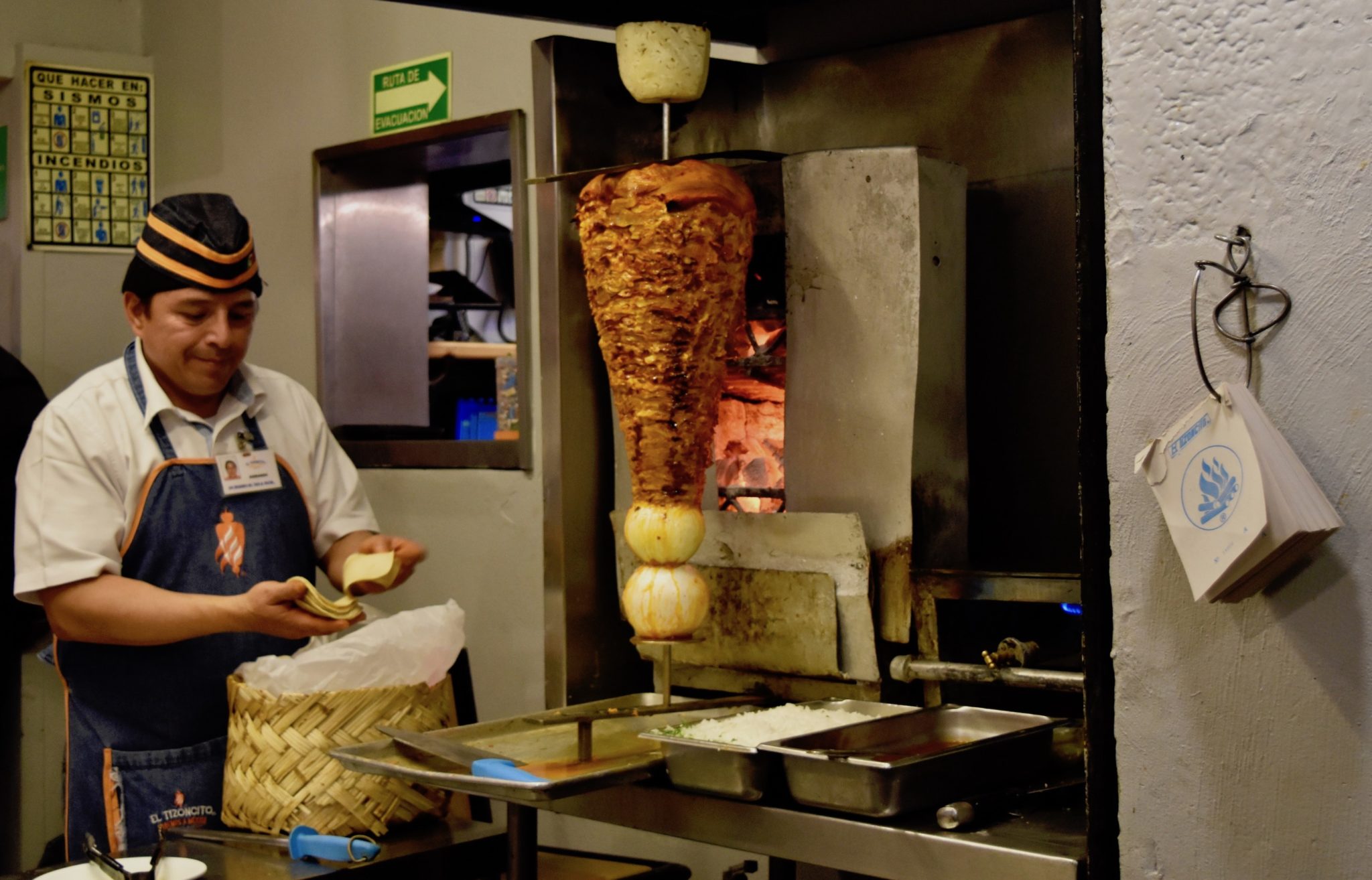 This taqueria in the Centro Histórico has been running since 1959 and is still one of the most popular in Mexico City. If I had to choose, I would say these just beat the tacos al pastor at El Tizoncito, but both are delicious and worth visiting! 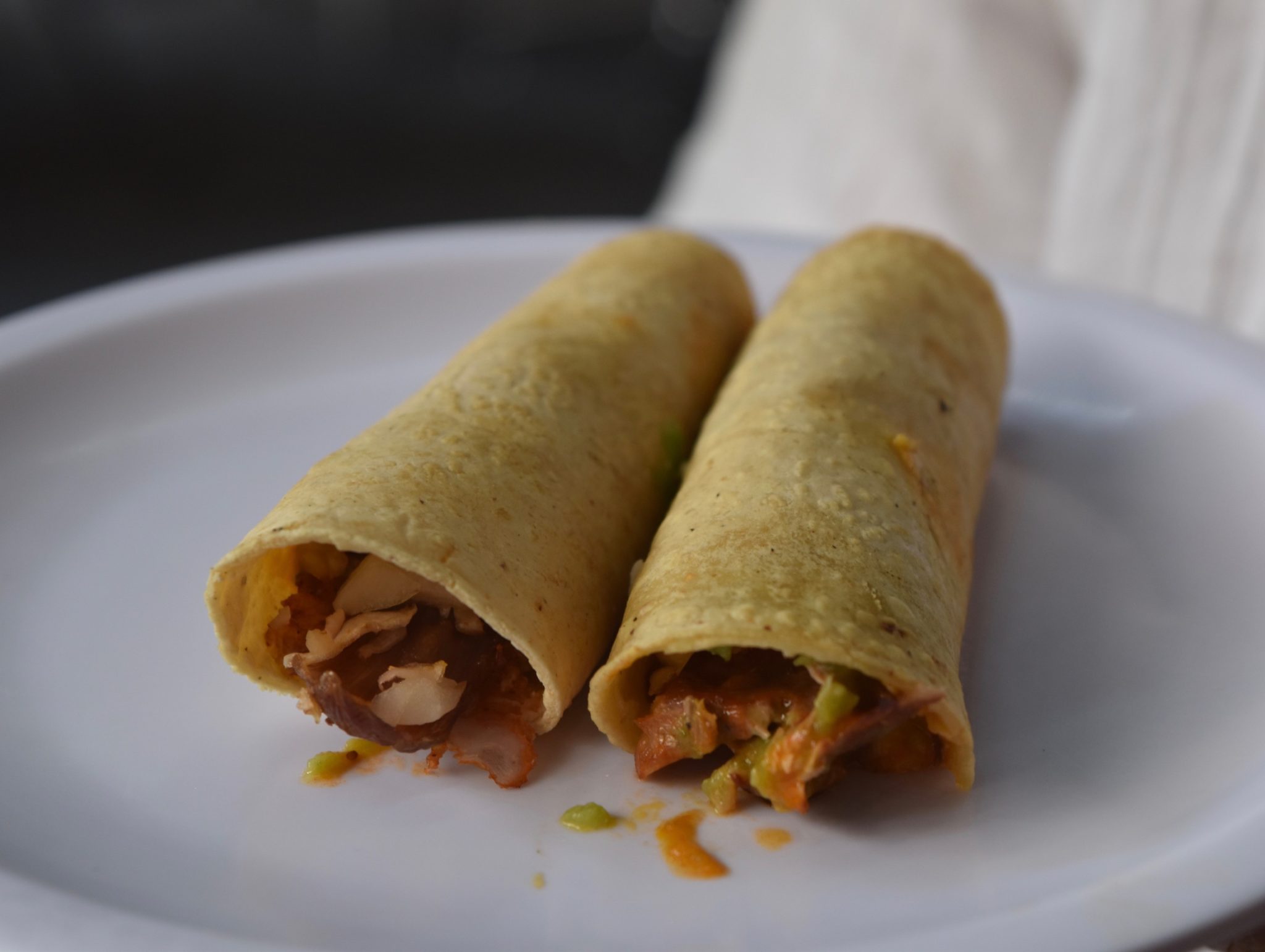 Tacos Arabes originated in Puebla, a city south-east of Mexico City. Similar to tacos al pastor, tacos árabes use pork from the trompo seasoned with different spices and often served in pita-style bread.

This is a great place to try tacos árabes, located in the Condesa neighbourhood. It’s a tiny place and very popular. The tacos are served with Oaxacan cheese and great salsas. Best accompanied with a Mexican beer! 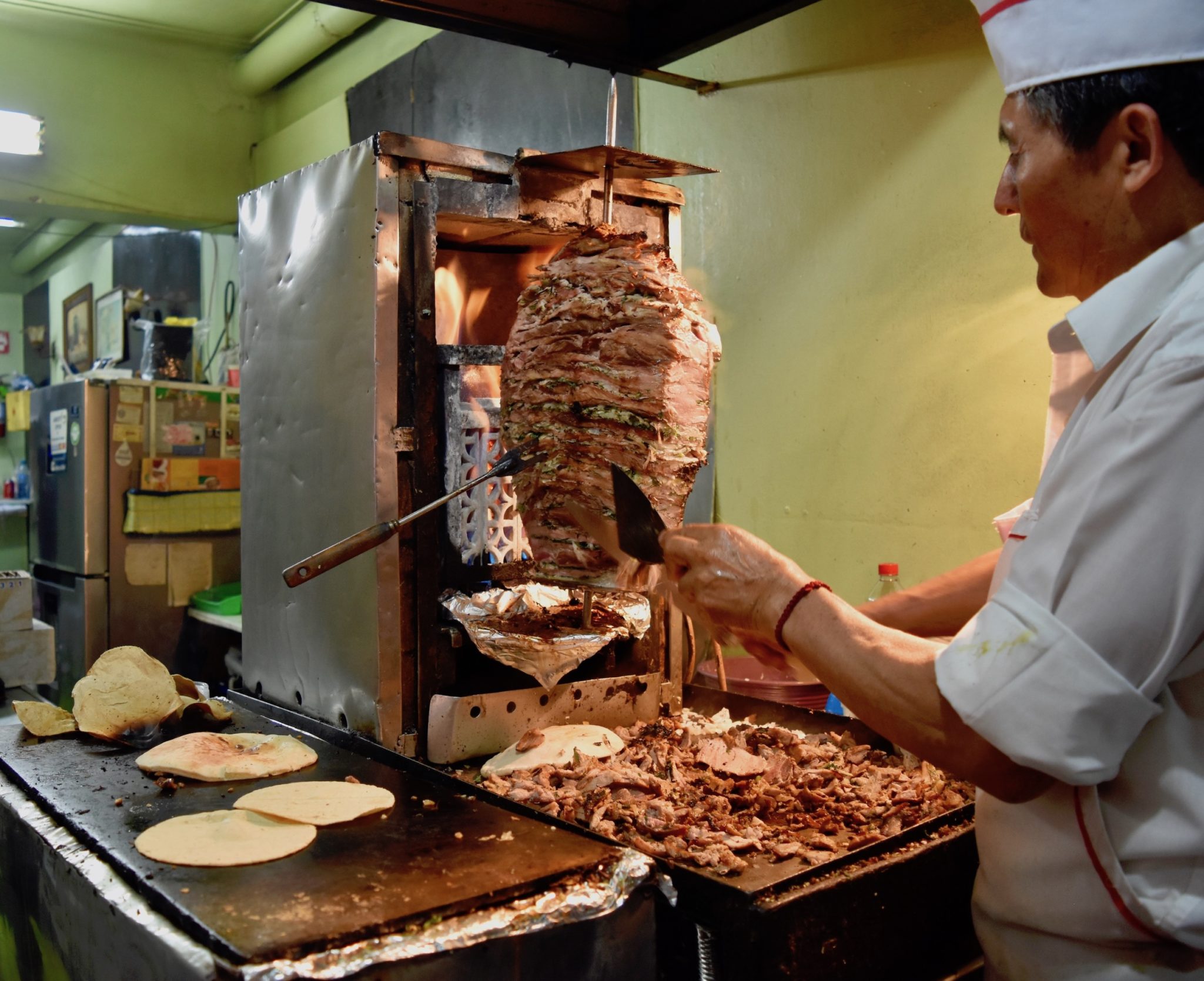 Taquería El Jarocho has been serving tacos for more than 70 years in Roma. Their specialities are tacos campechanos and tacos de guisados (stew tacos), served in handmade tortillas. 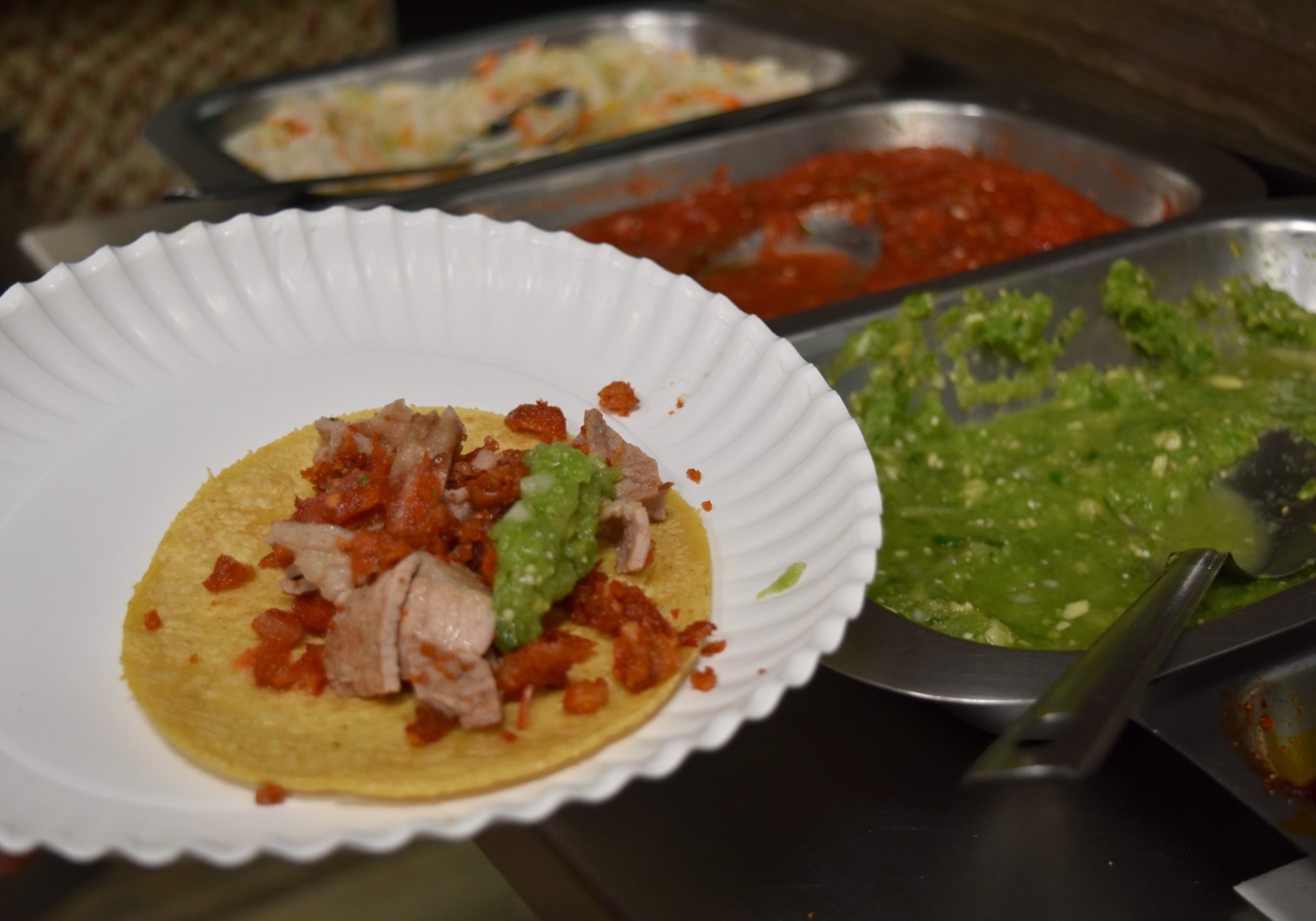 Cochinita Pibil comes from the Yucatan peninsula, but you can find some excellent options to try in Mexico City. Slow cooked pork marinated pork in sour orange and achiote, served with pickled onions. Traditionally the meat is wrapped in banana leaf and baked in the ground in a BBQ pit.

This is a great place to visit, even if you’re not eating the tacos (though you should!) Located in Roma, the cantina has been renovated but still retains its old fashioned charm, including seats with in built drinks holders – so you don’t knock over your drink while playing dominos! The Tacos de cochinita pibil are delicious, accompanied by Maestro Dobel Diamante cristalino tequila. This is also the place we discovered Sangrita – a chaser for Tequila.

Other Great Tacos In Mexico City

A great place in the Centro Histórico, selling ‘basket’ tacos. You can choose between beans, potatoes, bacon with salsa verde, eggs and much more. Perfect for refuelling while visiting the main tourist sights. 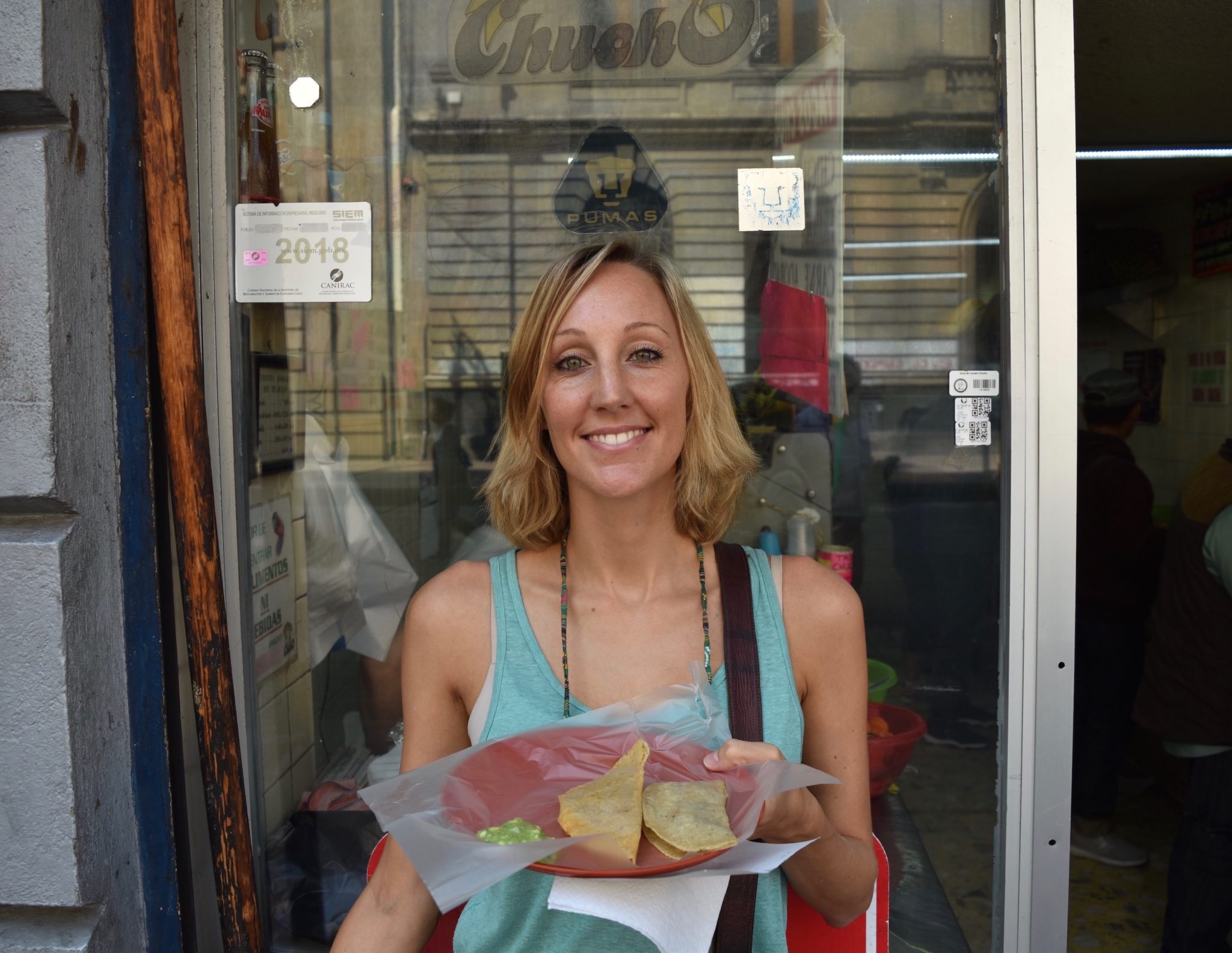 Another spot in Centro Histórico. Ricos Tacos Toluca is known for its green chorizo tacos! It’s a typical hole in the wall type vendor with plastic seats on the pavement if you want to sit and eat. If you don’t fancy the green, they also do red chorizo (although I definitely recommend trying it!) 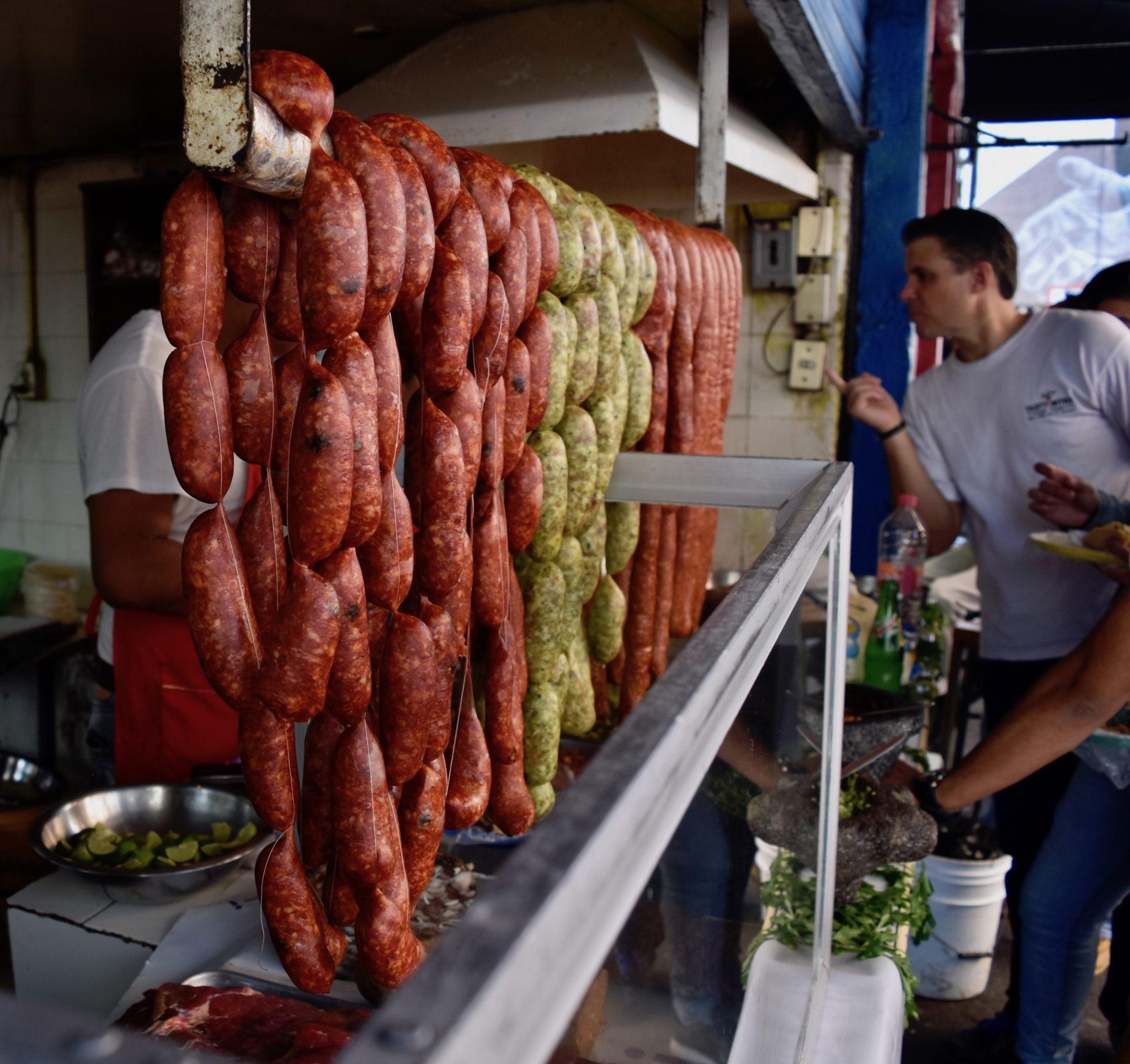 Los Cocuyos is the place to come for a variety of meats. Slow cooked in a huge bubbling vat you can choose from ojos (eyes) or lengua (tongue), campechano (mixed beef and sausage taco), suadero (brisket), tripe, chorizo and pig’s head. The meat is then seared on a hot plate and accompanied with lime juice, radishes, coriander, onion and your choice of salsa. The best part – they are open all night! 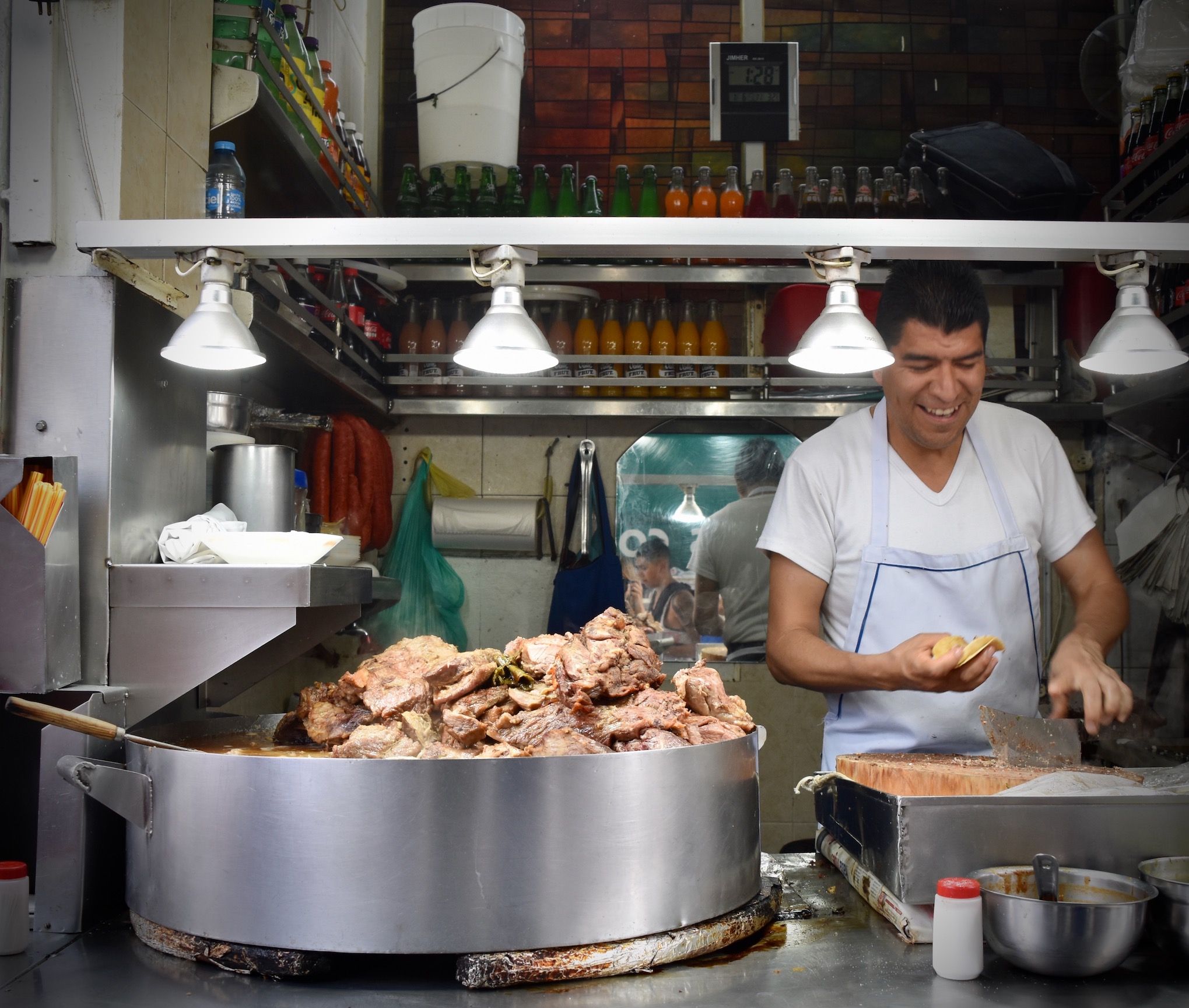 What Else & Where Else To Eat In Mexico City

It’s not all about tacos in Mexico City; there are countless dishes and eateries to try. Some of our favourites are:

Tortillas rolled into a tight ‘flutes’ filled with meat and covered in a delicious sauce. Yum. This place was recommended to us by our lovely hosts at Chaya B&B – and it was one of the best things I ate in the whole of Mexico! They also do excellent pozole – a kind of Mexican soup/stew. 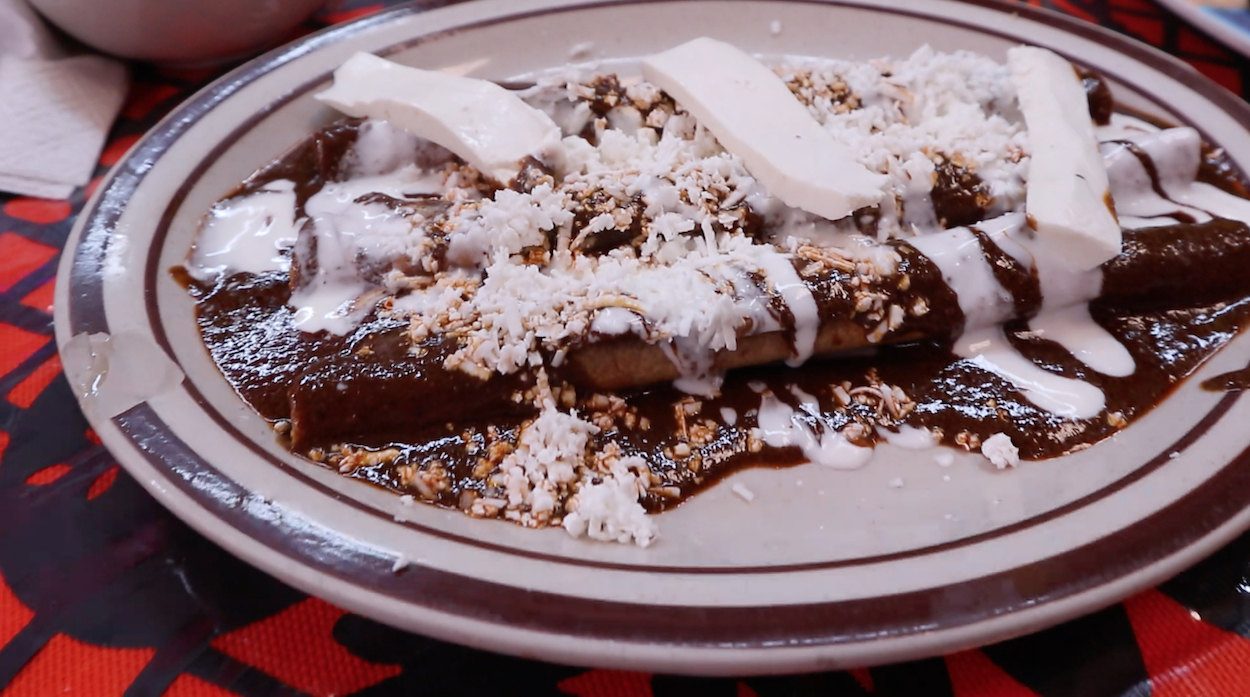 Mercado San Juan (San Juan Market) is actually two markets, located a block apart. One is more of a produce market, selling meat, fish, fruit and veg and the other (Mercado de San Juan 78) has food stalls, where you can sit and have a meal. La Olla De La Abundancia (above) is located in Mercado San Juan. If you’re brave, there are some interesting options on offer, including alligator, iguana and scorpion! 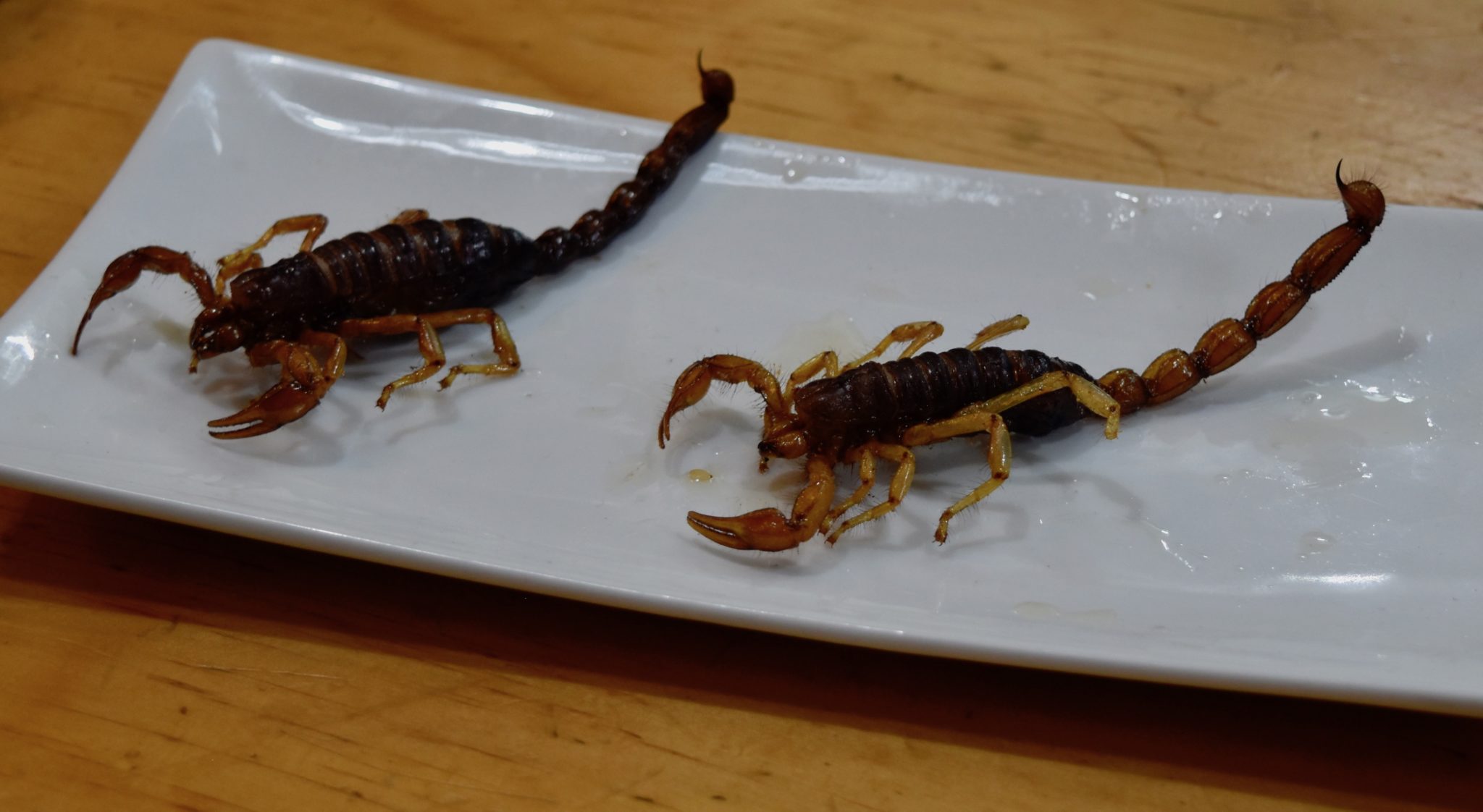 Once of Mexico City’s iconic treats. El Moro offers fresh churros with a variety of dipping chocolates including Spanish (The traditional, sweet and thick), French (With a touch of vanilla) and Special (Semiamargo (semi bitter) with a touch of cinnamon). There are 12 branches in the city, so you’ll have plenty of opportunities to try them!

What To Drink In Mexico City

Whilst exploring the many great food options in Mexico City, be sure to stop for a drink or two. Some must try beverages in the Mexican Capital are:

Mexico is the birthplace of chocolate and you can’t leave Mexico City without trying some Chocolate. In Mexico, chocolate is more commonly served as a drink and is often made with cinnamon or other spices. One of the best places to try this is at Mayordomo in the Centro Histórico, which serves delicious Oaxacan chocolate with milk. 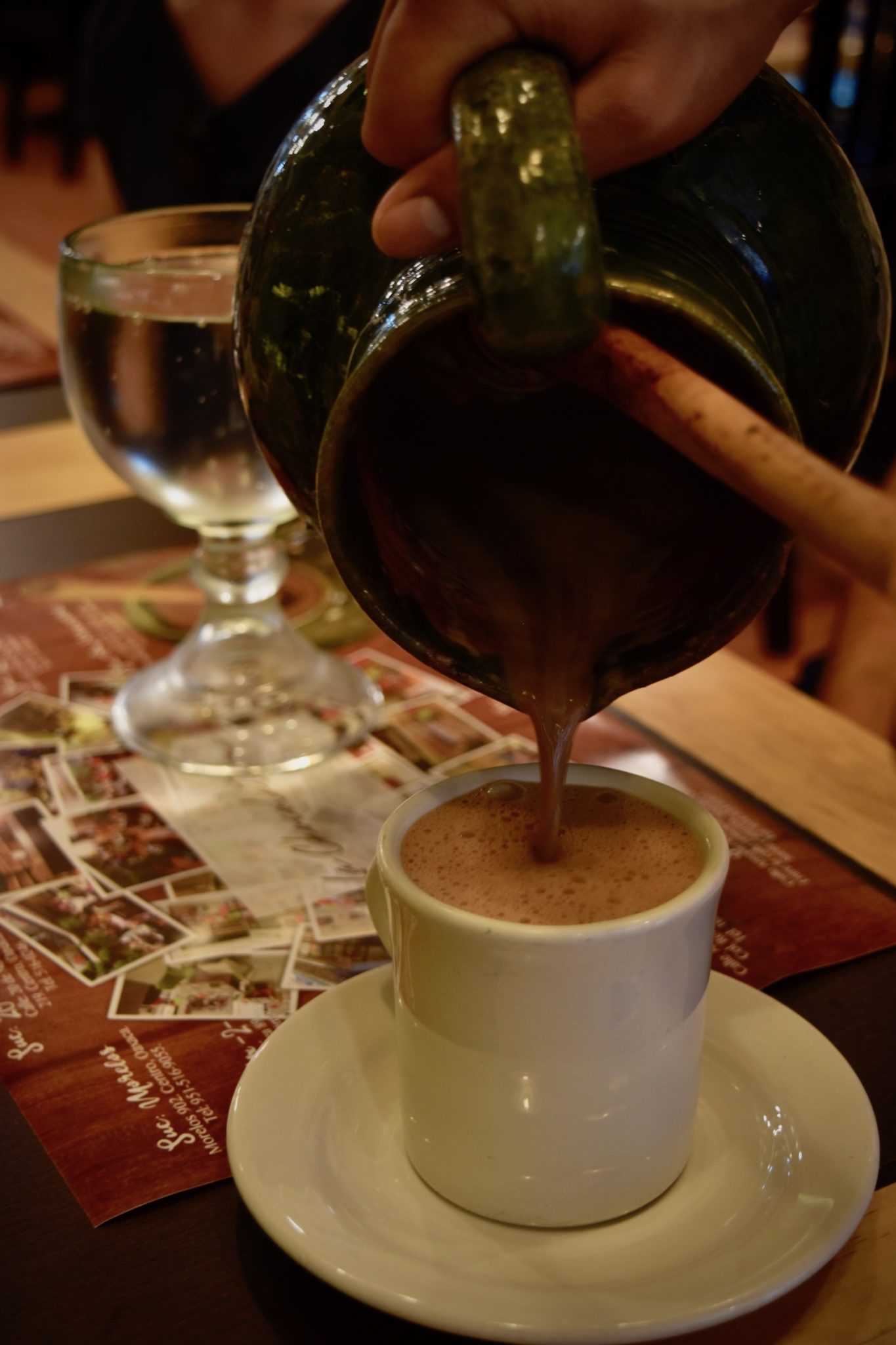 There are plenty of good places to enjoy the famous Jaliscan spirit in Mexico City. Best sipped with an accompaniment of Sangrita – a non-alcoholic chilled drink usually made from tomato, lime, chilli and Tabasco sauce (although recipes vary). Try at Bar La Ópera in Centro. This historic bar opened in the 1870s and still retains its traditional charm. Also a great place to sample Mezcal. 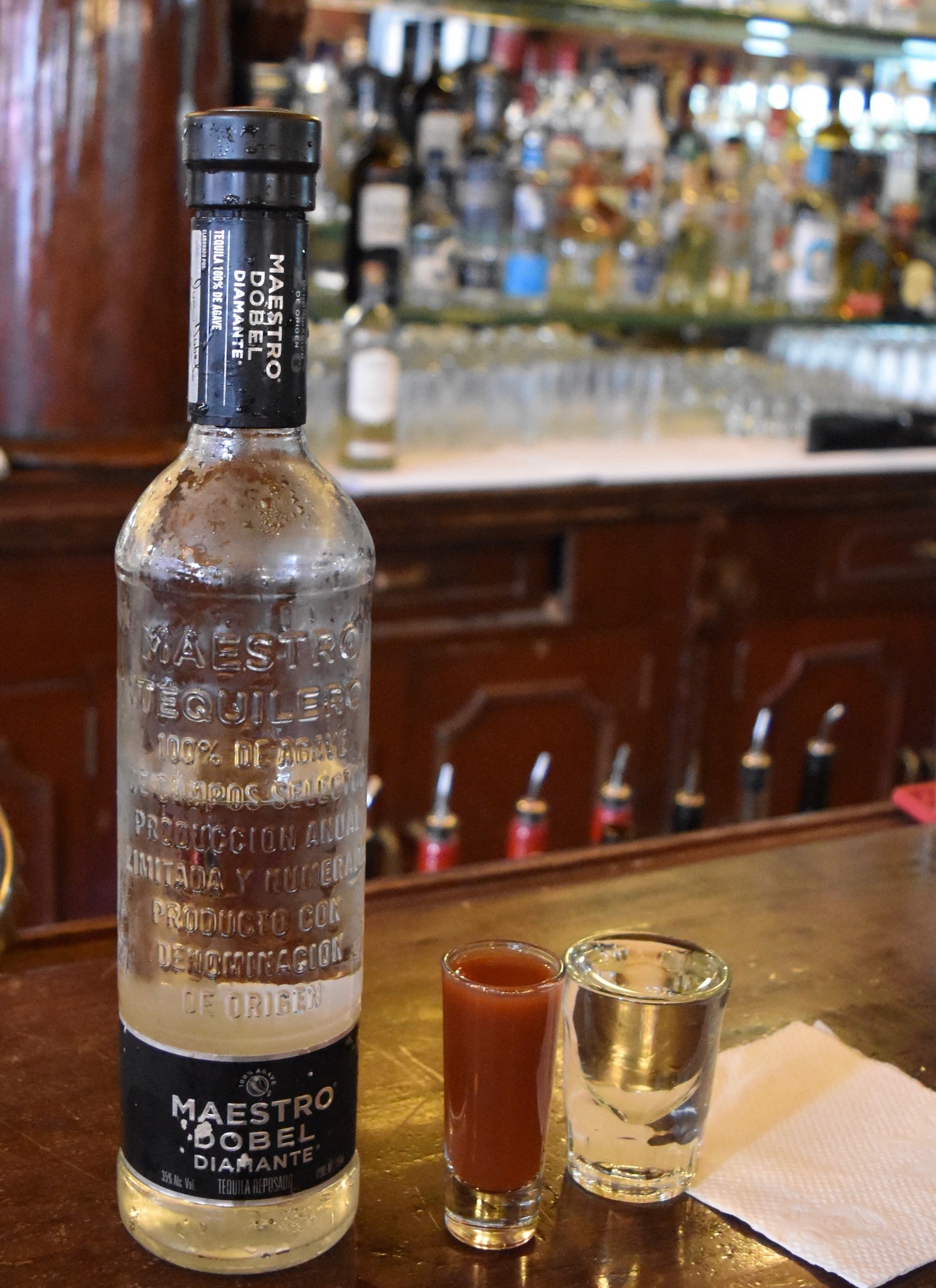 Though not as well-known as tequila, mezcal’s popularity is definitely on the rise. I’d had it a few times prior to visiting Mexico, but once we were there it quickly became a favourite. Originating from Oaxaca, mezcal is made from the same Agave plant as tequila – but usually has a smokier taste. Try Artisanal mezcal at Escollo in Roma. (Also a good place to try tlayuda – the Oaxacan equivalent of pizza). 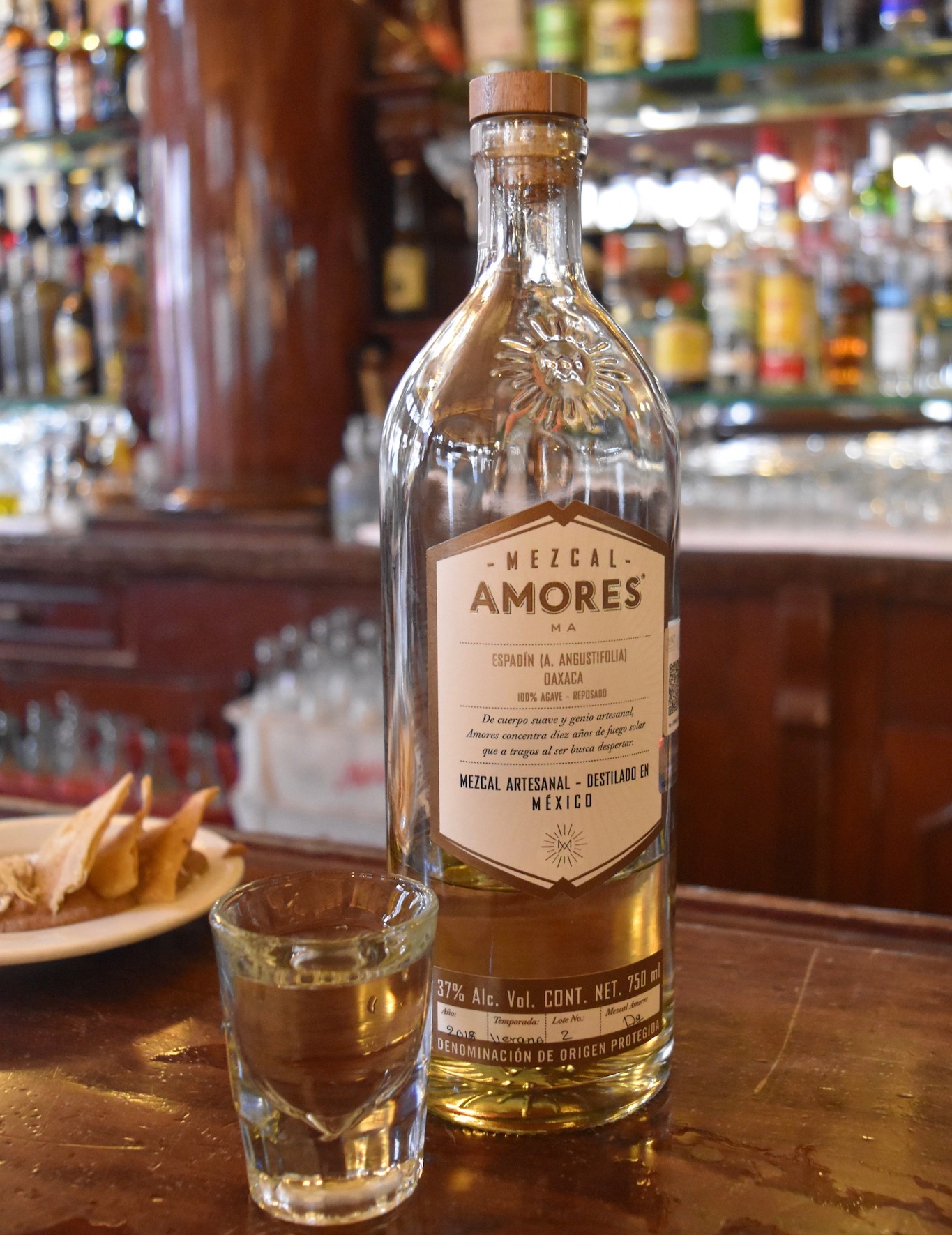 I have to admit I had never heard of this drink before arriving in Mexico, but in fact, Pulque is Mexico’s oldest alcoholic drink. It is made from the fermented sap of the maguey plant. It has low alcohol content and is considered to have many health benefits! Try some at the city’s oldest pulqueria – Las Duelistas or sample some interesting flavour varieties at La Nuclear in Roma. We opted for Coconut & peanut pulque. 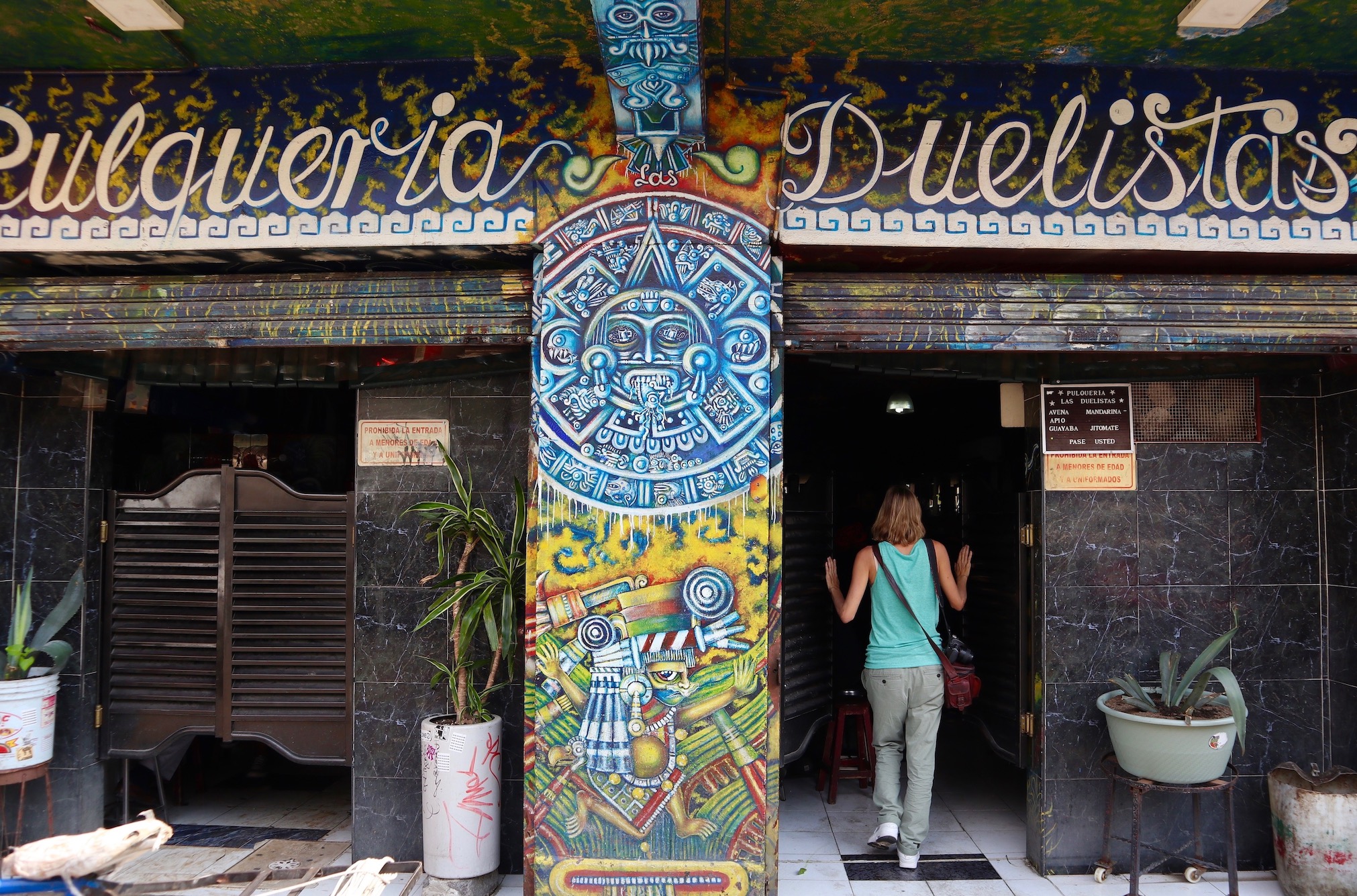 Where To Stay In Mexico City

We spent a lot of time researching where to stay in Mexico City. It’s a huge place (23rd largest city in the world in case you’re wondering!), so we really wanted a good location to explore as easily as possible. We narrowed our search down to three neighbourhoods – Centro Histórico, Roma and Condesa. The latter two are trendy districts, full of great eateries and the first is home to the famous Zocalo (central square) and plenty of museums. Chaya B&B Boutique was the perfect choice as it was in the middle of the three. West of Centro Histórico, but within easy walking distance and a short taxi ride to Roma and Condesa. 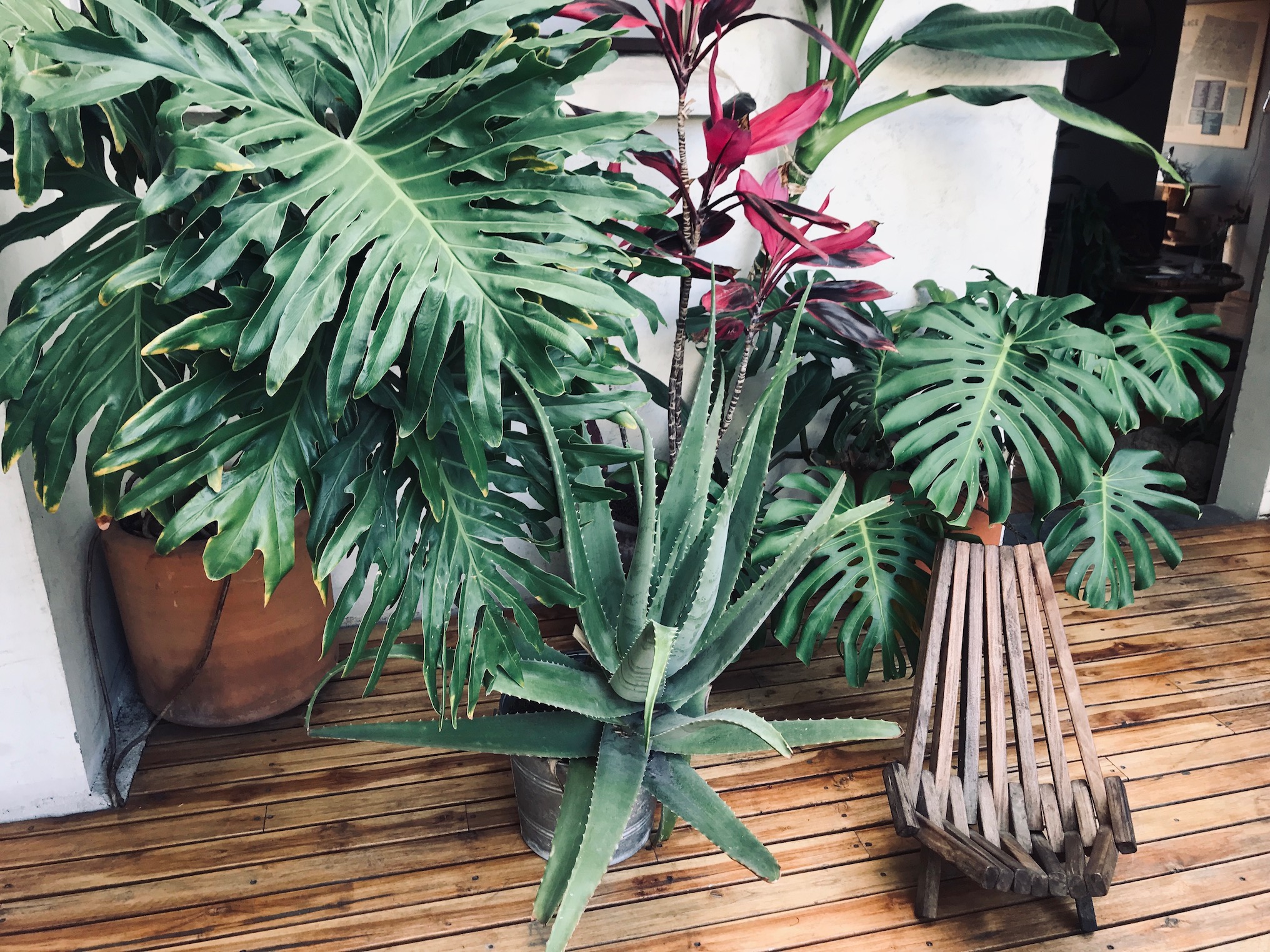 The terrace at Chaya B&B Boutique

Chaya is located at the top of Barrio Alameda, a renovated 1920´s building on a pedestrian street overlooking the park. Also in the building are a number of restaurants, bars, boutiques and small businesses. I just loved this B&B, it was one of my favourite places we stayed in the whole of Mexico. The rooms are so stylish, there’s a lovely internal courtyard with hammocks and the Mexican breakfasts were so good! You sit around a big communal table with the other guests and we met some lovely people here, as well as getting lots of great travel tips for our onward journey. Rooms start at $145 USD including taxes and breakfast. 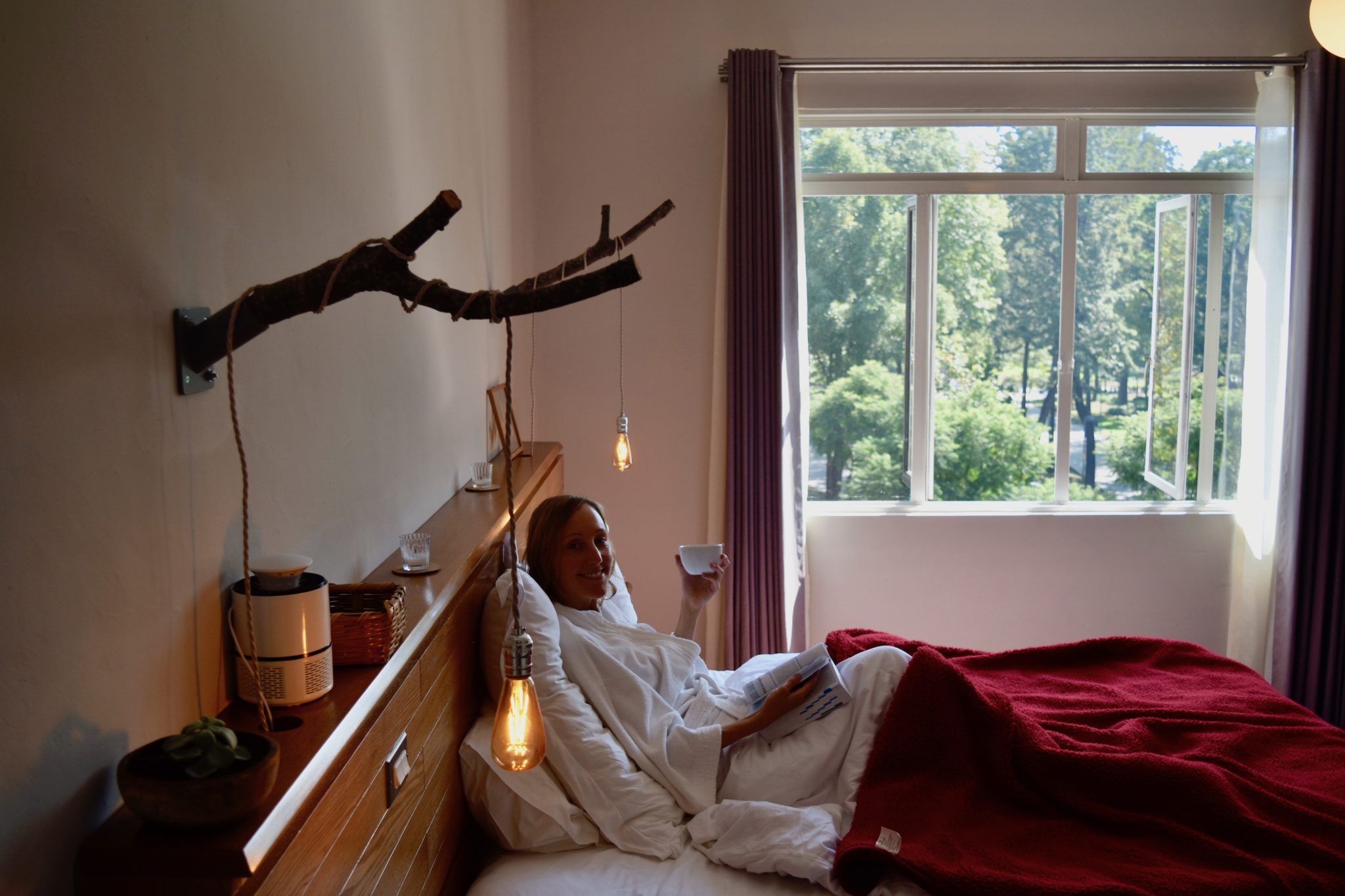 Our lovely room at Chaya B&B Boutique overlooking the park

How To Get To Mexico City

You can fly direct from London to Mexico City from £600 and from Sydney via L.A and Dallas from £900.

A Guide To The Manaslu Circuit

A Weekend In Brighton